As previously posted in an earlier episode, we camped on the river pontoon for friday night,as we’d planned a day out in Maldon on Saturday. Shelagh needed to visit a shop there to aquire some new jeans for work and we don’t have this particular company locally to home.

We set out in the car about 10:00 hrs for a mooch round the town, found a parking spot in one of the town carparks, which surprised me how easy it was for the time of day. After acquiring jeans we decided that lunch would be a good idea and found ourselves heading into Bees Cafe (which is on the first floor inside “The Emporium”). I’d certainly recommend a visit here if you’re in the area as the staff are friendly, the food was good and prompt., the store itself is exactly what it says on the tin, they have a huge range of stuff for the home here and a full blown garden centre to boot. 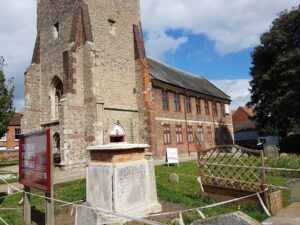 With lunch over we continued our stroll along the high street and at the time I took the photo of the Maeldune Heritage centre (right) I unfortunately had something fly into my eye. Well I thought nothing of it at the time, big mistake.

The Maeldune Heritage Centre is the home of the now famous Maldon Embroidery, a 42 foot long, vibrant colour and design embroidery which  celebrates the 1000 years since the celebrated Battle of Maldon in 991. Unfortunately for us, time was running out so we had to head back to the carpark and head back to the boat.

As the official last day of our two week holiday today was just a case of preparing the boat, preparing ourselves and packing the car for the trip home. Yeh right! if only!!!!

As the car was at the yacht station the plan, as simple as it was, We’d pack the belongings in the car, then Shelagh would drive the car to the marina via the local shop, while I motored the boat round to her berth. And that’s where that plan fell apart. Stage one, load the car, successful. Stage two, dispose of the rubbish, successful. Stage three, take the boat round to the marina. Failed miserably. Shelagh was still inside the boat finishing a wash up when I decided to start the motor ready for the run round, which I duly did. Then promptly turned it off again when Shelagh shouted at me that she could see sparks appearing from under the engine cover. And it turns out that a lead had come off the starter solenoid just as it fired up the first time, obviously vibration. Unfortunately having discovered and remedied this, now the starter wont turn the engine over at all. My suspicion is that the starter solenoid exploded internally when the lead came off, and since i’ve been home it transpires that the starter and solenoid now come as one unit, around another £320 squids. The really stupid thing is, I could have started the blasted thing with the hand start and completely forgot that this engine had one fitted. What a twit. Oh, the other thing was, my eye was beginning to give me grief having been ok for the past 24hrs and Shelagh was going to have to drive us home. (and I’m not a good passenger in my own car). Basically we abandoned Pleinair on the pontoon, notified the marina of our intent to come back down during the week and left for home.

Monday, to all intents and purposes was the day that both Shelagh and I should have returned to work, only I was due to have an ECG taken and a 24 hr ECG fitted. My eye had started to close up and was making seeing difficult so Shelagh called in to work that she would be late and drove me to the surgery. Tuesday was a repeat to have the 24hr ECG removed. Now I’d like to add that on the Friday previous I’d also noticed that I had the start of a head cold, great! Basically i’ve been in bed asleep for the most part of this week averaging around 16hrs sleep a day, dosed up to the very sore eyeball with a famous cold and flu remedy. Longest period of sleep, around four hours. But its getting better. Its now thursday and I can see well enough to write this, although its not perfect yet. The cold is slowly disappearing and I’m awake. I think!!!!!!