I don’t know why but it seems that this holiday is fated before it starts, as you know, yesterday was a bit of a disaster, read on to find out what went wrong today.

So, the day started like all the others do, I got up about an hour before Shelagh had the customary coffee and started pottering about the boat. The weather didn’t seem unreasonable and we decided to head off once breakfast was over, in fact I vaguely remember that we’d decided the night previously that we needed to be on the move between 0900 hrs and 1000 hrs to maintain the tide favour at the other end. Our target today was Halfpenny Pier in Harwich or Suffolk Yacht Harbour at Levington on the River Orwell. Our other option was the anchorage on the River Stour, but Harwich was the first choice.

We duly set off from Fambridge and pottered down the river under the engine initially. Once we’d cleared the moorings the sails came out and the engine went off, then the sails went away and the engine went back on. The on mast furling main was playing up again and I decided there and then that when we get back I’m going to dig out the slab reefing main I inherited with the boat and give it a once over. I suspect its past its best, but it’ll be better than putting up with what is supposed to be a simple to use system that seems to take all my effort to unroll and put away again. Maybe I’m doing something wrong, I don’t know.

Anyhow, once I’d managed to get the mainsail away again I unfurled the genoa and we pottered off down river on just that, nothing spectacular, no real trimming just a steady jolly with the wind varying between a beam reach and running. By the time we’d reached the Inner Crouch, we were trogging along at a steady six knots. Woohoo.

Now here’s where it starts to go pear-shaped. Our tiller pilot (that Shelagh had previously named SIMON) can take individual waypoint instructions from the chart plotter, by putting it in auto mode and hitting Simons ‘nav’ button. This way it will take you to the next waypoint. So, having hand steered down river I decided in my infinite wisdom that it was time to let Simon take over. Yeh, great idea, only when you do so, make sure the chart plotter is actually heading for the same waypoint you are. And which muppet forgot to check this, you got it. ME! Just under an hour later, we’re having a whale of a time, trogging along when there’s a slight bump, “what the f*** was that” feels like the bottom, jumps up checks the chart plotter and sure enough we’ve been heading across the Buxey Sands towards Swin Spitway. And now its too late to do anything about it. Annoyingly, had we been 100 Metres further on, we’d probably have made it off. You guessed it, we’d crossed the Buxey on a falling tide. At this point I was extremely glad that I’d bought a Bilge Keel boat, so I made a quick phone call to Dover Coastguard to inform them of our situation. They insisted on setting up an hourly radio check in, which we happily went along with. Once the last of the water had gone from under us, Shelagh set about making dinner and I set about  dragging the anchor out and giving the bottom a lookover and scrape. I think Pleinair will be coming out this winter, there’s not a lot of antifoul left on there. Well, we sat there for best part of six hours waiting for the return of the wet stuff to refloat us which it duly did. While we were sat there pondering we decided that it would be better for us to alter our route and head into Bradwell riverside, so the chart plotter was reset to a new route and at the relevant time, we set off again.

About the only thing achieved today was that I ended up doing my first night navigation, by the time we finally got into Bradwell Marina it was absolutely pitch black and overcast with no moon to speak of. Great fun and what a baptism into night cruising/sailing.

Due to our late arrival (2315 hrs) we decided to have a day of rest so day three was basically a lounge around and do nothing kind of day. 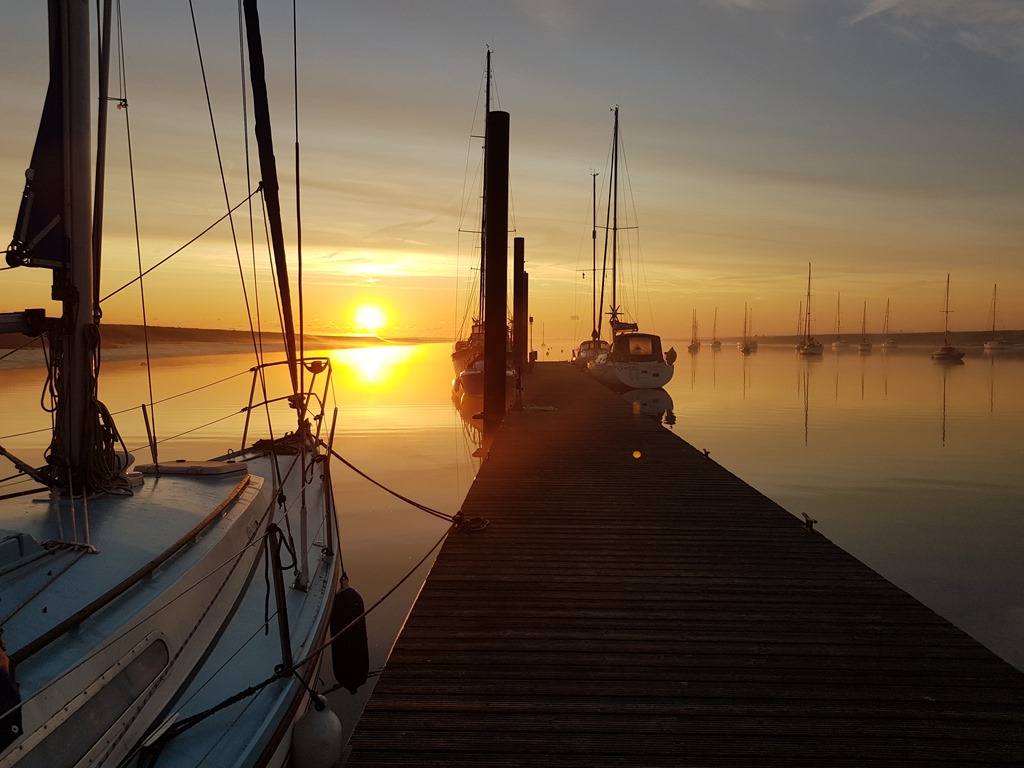