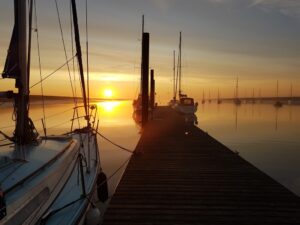 It has to be said, as I write this, Tony is not a happy bunny.

Our Autumn cruise so far isn’t going to plan, although I am cheered by the fact that a friendly skipper I know also appears to be having similar problems with the lack of stuff that makes one float.

The story so far.

I should have finished work on thursday ready to run home and pack for this week and pick Shelagh up. That didn’t happen and I eventually arrived home around 11:00 hrs on Friday, had a shower, took part in a shopping expedition and finally left about 15:00 for a two hour run south to Fambridge. I’d already moved Pleinair from her berth to the river pontoon the weekend before making use of the spring tides.

We arrived duly at Pleinair at 18:00 hrs and loaded up the boat with goodies. Mainly stores, clothes and beer. Can’t have a boating holiday without the beer. Friday evening we joined the Crew from SV Pagan for dinner in the pub then retired early.

Saturday had us pottering for a few hours, with me going up the mast to replace the radar reflector, this was abandoned as for some reason I didn’t feel comfortable. (I do not like heights having fallen off a ladder when I was somewhat younger).

I’d like to point out that I have previously been two thirds of the way up using the same setup and felt quite comfortable on that occasion. Anyways, I also added some line tidy’s to the bottom of the mast after which we pushed off round to the marina to stock up on go juice. That went to plan until we left, I took a little bit of a wide swing in the channel and promptly went aground. Oh well sit and wait for the tide to come in. An hour later we were on the move again. Our original plan was to head down river and anchor in the River Roach for the night before pushing on to wherever we decided to. However, due to the time delays with finding the bottom in Stowe Creek we decided to spend the night back on the river pontoon and push off in the morning.

Phew! What a week!