I thought it was about time I committed myself to writing up our Bank Holiday week report.

The week (well, more like ten days actually) started on Friday 21st with me meeting up with a friend of ours and setting off in convoy to Anderby in Lincolnshire to set up camp for the Barrowby Bell ringers ringing tour. I should point out that I am not a bell ringer, and never will be, although I’m more than happy to support Shelagh in her ringing activities and do enjoy the social aspect of these events. So after a slow journey of nearly two hours we booked onto the site and setup camp. Meanwhile others arrived slowly and we combined our efforts to put up tents and setup caravans. The wind wasn’t being kind to us and it took most of us three attempts to get Stephens awning in place. Dinner was collected by Shelagh and Melissa on their way over later, having been at work all day and an evening of Fish & Chips, beer and chat ensued. In all there were around 19 of us ranging from 5 to 75 years, oh and two dogs, Alfie and Arnie.

In summary, The ringers went off to ring while I pottered on site with Alfie for company. I was dog sitting, which, with Alfie isn’t difficult. Lunch for the day had been booked at The Half Moon Hotel in Alford and after a short journey in the car Alfie and I met up with everyone else. Alfie slept while I shot into the pub and grabbed lunch with the rest of them, then it was a short trip back to site via a quick look at Anderby Creek with a view to taking Alfie for a walk along the dog friendly beach. I abandoned that idea pretty quick as there was absolutely nowhere to park. Arnie decided that he didn’t like the idea of the sea and refused to go any further than getting his paws wet. Returning to site and a quick coffee later Jen decided to take the remaining of her three children and Arnie for a walk to the beach across the fields, its only just over a mile so after loading them up with  various bits of kids beach paraphernalia, Alfie and I joined them for the walk.  In hindsight, playing on the beach with Arnie, the walk there and the walk back was, I think, a little too much for him, he crashed out on his bed when we got back to the site and apparently slept for almost two days with very little interest in moving.  BBQ and beer in the evening.

Up relatively early, the ringers went off to Alford to ring for service while I made a start on packing up. Once they’d come back it was just a case of break camp, have a spot of lunch then off home in the car, unpack the camping kit and load up for the boat. 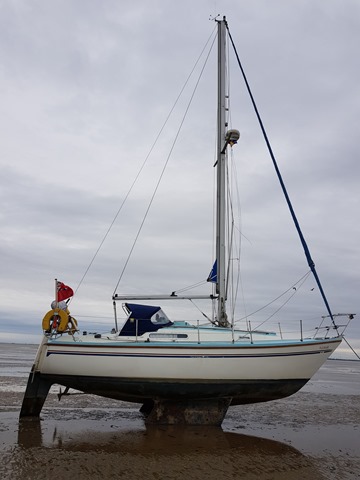