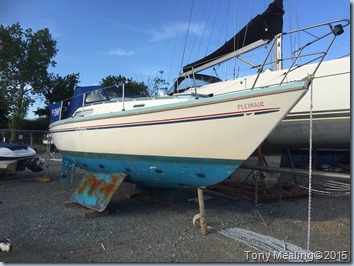 It was suggested by Shelagh that I might like to spend the week sorting Pleinair and getting her back in the water so we could start to enjoy a little boating this season. I naturally jumped at the chance and half-six last Saturday morning (18th July) I jumped in the car loaded with various bits and bobs and headed off to Fambridge, arriving for breakfast with my mate Bruce, at West Wick Yacht Club about nine.

Breakfast over it was on to the task in hand so I loaded the boat with my personal stuff and got on with it. During my absence Bruce had kindly pulled through the mast the replacement wind instruments data cable and the mast had been re-stepped leaving me to run and reconnect all the electrics internally.

I’d decided that the aim for this week was to get Pleinair back in the water which basically entailed much rubbing, scrubbing and painting her Keels and Bottom. Putting all the bits of string back where they go and getting the canvas back in place, with a target day of Thursday to be re-floated which meant that the Antifouling had to be on the bottom of the boat by 0800 Wednesday morning to allow the required 24hrs it said on the tin.

I’d previously spent time working on the keels and the first coat of oxide had been applied to both port and starboard keels outer faces. Which basically left the two inner faces to deal with. 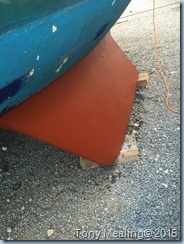 Saturday was spent mostly laid on my back under the boat removing several layers of antifoul, undercoat, red oxide and rust. with Sunday and Monday being pretty much the same, however by Monday afternoon I had applied another coat of red oxide to the two outer faces and the initial coat on the inner faces of both keels.

Work had naturally been interrupted by 19:00 hrs. each day for a shower and dinner in The Ferryboat Inn, which generally involved a ten minute walk from the marina round to the pub.

On Tuesday i had what can only be described as a lazy day of not doing much, although I had applied the second coat of Red oxide to the inner faces of both keels, followed by a birthday drink in the pub with Bruce (Erbas) and Chris and Ronnie (Tomahawk).

I had also pottered around inside the boat reconnecting electrics and having a general tidy and clean. I also discovered the whale tap in the galley was leaking, which explained the pool of water in the bottom of the galley cupboard. this was somewhat a relief as both the seacocks for the engine intake and the sink outlet are under here. oh well another job to add to the list.

Wednesday I was up at the crack of sparrowfart and by 09:00 I had applied a tin of Hempel Tiger Xtra to the the bottom of the boat, she was now ready to go back in after allowing the drying time, as it happens there was only 23 1/2 hrs. drying time, but I’m not going to worry about a missing half hour. To be brutally honest there seemed to be a lot of missing half hours over the last few days. 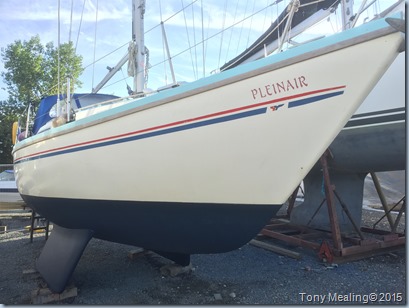 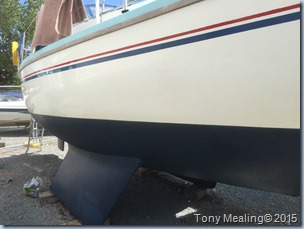 When we collected Pleinair from Port Solent it was very obvious there had been a lack of TLC over the previous months and her freeboard areas of white were somewhat dull and dirty, during the period of keel scraping and painting, if I had become bored and needed a change I’d taken a bottle of 3m gel coat restorer and wax and the new Bosch Sander/Polisher to her sides. It has to be said I’m somewhat pleased with the efforts and although there are areas that will need attention later she now has a new shine about her, as can be seen in the pics. 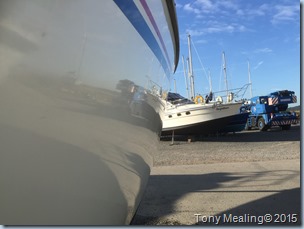 So, Wednesday, after the Antifoul had been applied I pottered around doing other odd jobs that needed doing. I removed the now defunct Navtex aerial from the stern rail, moved the GPS receiver (GPSMap Unit, see notes) to the other side and added the new dedicated GPS for the AIS unit to the rail. This had been temporarily left below decks on the quarter berth for the delivery trip but begged being placed outside.

Dinner Wednesday was taken aboard Erbas, alongside the pontoon on the river, with Bruce producing a chicken Korma and Rice ( there was enough rice to feed china), followed by an early night, ready for the pending return to the water on Thursday. 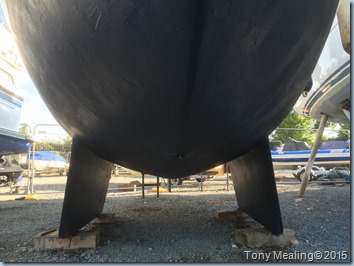 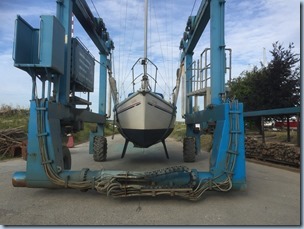 Thursday 08:00 Hrs. Wiggy arrived with the remote control for the hoist, admitted that due to the state of the tide it was going to be touch and go if there was enough water. Hoisted Pleinair and made off down the slipway. Well, to cut a long story short there was enough water to float the boat, I backed out of the hoist and reversed as far as i thought enough, turned to starboard and promptly put the port keel in the mud, and that’s where i stayed until Half two when the tide had returned enough to clear me from the mud.

Motoring out of stow creek and onto the river had no incident. I even tried out Simon our new Tiller pilot. (its a Simrad one and I never named it). Going down River through the moorings I noticed that there was room on the inside of the pontoon so decided to have a look at my own mooring then return to the pontoon. I stayed here and pottered around on board for the remainder of Thursday and Friday, doing some of the little jobs i couldn’t do while in the yard. Thursday evening I cooked on board for Bruce and Myself then we tackled hoisting and furling the main. this wasn’t as straightforward as wed hoped, but it was definitely easier than the first time. I also noticed another area of the on mast furling that didn’t look right and after investigation we concluded that this also hadn’t been rigged correctly by the previous owner. Its no wonder we were having so many problems with the furling system on the mainsail. I’m convinced that the system will loosen up with use and I’ve got to give it the benefit of doubt before I remove the lot and revert the system back to a slab reefing main. Friday night there was a large blow forecast and after visiting the pub for dinner with Bruce (I twisted his arm between the rain showers). I settled down for the night. This wasn’t to be and I discovered during the night that the wind was causing me fender problems. So at least three times during the night the squeaking of the fenders had me up rearranging them or dropping them back in where they should have been. This is another area I’m going to have to investigate as the fenders all need replacing anyway.

The interesting thing was, on Saturday morning when I released the aft spring the boat seemed to settle properly and better, oh and the squeaking fender issue stopped too. Looks like I’m going to have to do some experimentation with the way I set my fore and aft springs.

Saturday, after I eventually crawled from my pit was spent loading the car, washing down the cockpit and coamings and having a good ole tidy up below decks. Then, after Bru arrived from work it was down to the mooring for Pleinair, where hopefully, she still is.

The installed gpsmap chartplotter at the nav station also provides the location data for the DSC VHF, I’ve decided to leave this setup intact for now even though I am now using a dedicated touch screen unit at the cockpit. The wiring setup behind the panel at the nav station/chart table also leaves a lot to be desired, This is another contributing factor into my decision to leave in place a system that is currently working, even if it is taking up space. Once the system has been redesigned I’ll do away with the second GPS unit and just leave the dedicated AIS unit in place. Until then, Hey Ho! it all stays in place.

I’m contemplating upgrading everything over the next few years to take full advantage of the NMEA 2000 Network capabilities. We’ll have to see.